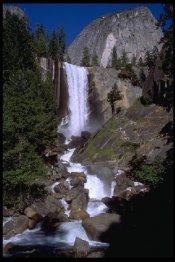 “We sort of hijacked this ride from the Sacramento Wheelmen,” said a chuckling Steve Cimini, who with co-organizer Hazi Alwan recently traveled with about two dozen Bike Hikers members on a five-day journey to the park. “They put on a similar tour, and Hazi and I participated in it a few years ago. We kind of looked at each and said, ‘You know, we could do a better job.’ ”

Cimini’s remarks speak to the friendly nature between the two clubs and also to the attractive nature of pedaling in Yosemite, an exceedingly popular destination. Both clubs offer the same approach – recreational enjoyment.

“This is a tour; it’s not a race through the park,” Cimini said about his club’s tour of Yosemite. “So you take your time. And if there’s something you want to spend some time doing, you definitely should do it. You stop the bike once in awhile and get off it.”

With their bikes transported by van to Merced, the participants departed Sacramento early on a Sunday morning via Amtrak. Upon arrival and after collecting their gear, the group rode approximately 50 miles to Mariposa for a one-night stay. The next day, the riders advanced 25 miles to their base camp, Cedar Lodge, eight miles shy of Yosemite.

For the next two days, participants determined their own cycling, hiking or sightseeing tours in Yosemite Valley, with the fifth day reserved for the return ride to Merced.

“One of the reasons we’re leaving on Sunday morning is so we can spend most of the time in the park in mid-week,” Cimini said. “The crowds will be a lot less, and it will be easier to get around and see all the sights. It’s a very scenic and very beautiful route.”

The Wheelmen’s annual trip to Yosemite began several years ago, but it’s on hiatus this year, replaced by a journey to the Sierra Nevada gold-mining hamlet of Columbia.

“The middle day took the riders twenty miles from Cedar Lodge into Yosemite Valley, a short trip but with 2,000 feet of vertical with a couple 8-degree pitches,” said Sacramento’s Geno Masuda, who wrote about the 2002 Yosemite trip for The Wheelmen’s Web site. “Most of the riders spent the day enjoying the grandeur and sights of the Valley, visiting the Ansel Adams Photo Gallery, watching the film on the history and geology of Yosemite, and lunching on the patio of the Awahnee Hotel.”

Touring with a club, of course, isn’t a requirement for cycling in the national park.

Route No. 1 begins from Curry Village, progresses past the horse stables and continues to Mirror Lake. There’s a designated bike stand just before the lake. On the return journey, Holden suggests, “Stop at the stables and visit our friendly horses and mules.” The estimated round-trip distance is two miles.

Route No. 2 begins at Yosemite Lodge, advances on the bike path across Cook’s Meadow and over the bridge toward the chapel. The course continues past the Le Conte Memorial and arrives at Curry Village. Again, Holden suggests a snack break: “Stop for great pizza or ice cream at Curry Village.”

The return to Yosemite Lodge is accomplished by simply following the bike-path signs. The estimated round-trip distance is five miles.

On either route or a self-determined ride, the paved cycling path in Yosemite Valley is primarily flat with occasional slight inclines and includes views of the Merced River and Half Dome.

While many cyclists visiting Yosemite bring their own bikes, a variety of rental bicycles (including tandems and hand-crank models) and accessory equipment (trailers and helmets) are available at Yosemite Lodge (209-372-1208) and Curry Village (209-372-8319) from early spring through late fall.

Bike rental prices vary from $5.50 per hour to $21.50 per day and include a helmet, which is required for cyclists 18 and younger and recommended for everyone.

Cyclists, who are required to pay $10 for a one-week day-entrance pass, also pedal on the open roads of the park, away from the valley and its designated bike path. The roads don’t have a cycling lane. Maps are available at the various park entrances.