. . . (The Court of Arbitration for Sport (CAS) in Switzerland has ruled against dethroned 2006 Tour de France champion Floyd Landis’ to bid overturn his two-year US Anti-Doping Agency (USADA) ban and clear his name.

Landis will have to serve the full two-year suspension retroactive to Jan. 30, 2007, the date when he declared voluntary non-competition status. Landis was ordered to pay $100,000 in costs to the USADA.) . . .

And so nearly two years after one of cycling’s darkest moments, Floyd Landis has lost his arbitration appeal to keep his 2006 Tour de France title.

In the best of worlds, reporters are supposed to remain objective, but that’s not a reality. And when a decision like this goes against a nice guy, it’s more difficult to understand.

If you interview an athlete for several years, like I’ve done with cyclists and golfers (and years ago with NBA players), you develop opinions. Some guys (and women) you like, others you don’t.

Not too many reporters, as far as I know, like Barry Bonds. I’ve never interviewed him, but if half of what others have said is true, and after observing him for years, if Bonds is ever found guilty I’d revel in it. The guy’s no good, and whatever he’d get, he’d deserve.

But when nice guys cheat or they’re accused of cheating, it’s not the same. You meet Floyd Landis, you meet Tyler Hamilton and they both look you in the eyes. They’re humble. You respect how they train, how they conduct themselves, how they treat others. They epitomize sportsmanship, and you like them.

And like Greg LeMond and Lance Armstrong, Hamilton and Landis had good stories to tell and great skills to show. Like no others, the American foursome all helped endurance sports transition into the media mainstream.

It’s a world full of sports editors and reporters who used to play football, basketball or baseball and who perhaps thought maybe they’d make it into “The Show” if it weren’t for a bad break. Still, some get endurance sports, others don’t. And so the easiest thing for those who don’t get it, is to dismiss sports like cycling and provide only obligatory coverage.

Remember, for example, when loudmouth columnist Skip Bayless said cycling isn’t a sport? The guy’s never been to the Tour de France, but he sure had something to say about it.

It’s part of the same reason boxing and horse racing, both ripe with corruption, still get covered as if nothing’s wrong.

But forget walk-off home runs, clutch putts and game-winning jump shots. They’re all OK. But watch a guy leave the peloton and ride up a mountain in rarefied air high into the Alps or Pyrenees and then you’ve seen something. 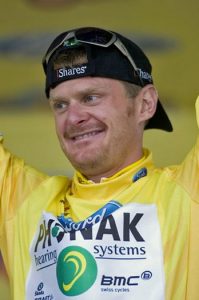 I can’t help but like it. I’ve seen hundred of race finishes, and when a rider crosses the line first and displays his own unique style of emotion — sometimes subtly, sometimes overtly — it’s great stuff. I look for it in every race I attend.

Several years ago now, when Tyler Hamilton (remember him?) tested positive, his legion of fans made buttons that read: “I Believe Tyler.”

It didn’t take long for slightly less innocent cycling observers to amend the phrase to “I Want To Believe Tyler.”

I wanted to believe Tyler, too. And I want to believe Floyd. Why would they cheat? How could they lie to their respective friends and families and to themselves?

It’s nothing new in sport or in life. People cheat for fame and money and who knows for what other reasons? Reporters cheat, cyclists cheat, and I suspect it’s well within the realm of possibility experts in French drug-testing labs cheat.

But if it’s Barry Bonds cheating, it’s one thing. If it’s a nice guy cheating, it’s not as easy to understand — at least not for me. But nice guys do bad things.

It’s been coming to this for a while. And now it’s a certainly. I still cover cycling and I like the athletes and the Tour de France. But I’ll never be able to view cycling the same way again.