As a practical guide to the 26.2-mile journey, How To Run And Enjoy The Marathon is a series of 15 self-help and service-oriented articles about running marathons – the proper shoes to running etiquette – is written by James Raia, a journalist and veteran middle-of-the-pack marathon and ultramarathon runner in Sacramento, Calif.

A contributor to many newspapers, news services, magazines and internet sites, Raia began to run long distances in 1983, the same year in which he completed his first marathon, the California International Marathon, in 4 hours, 12 minutes and 30 seconds.

How To Run And Enjoy The Marathon is based on the author’s more than 20 years of writing about the sport — its nuances, its elite athletes and its trials and tribulations.

Since he began training for his first marathon, running has become an integral component of the author’s lifestyle. Raia has completed more than 65 marathons and ultramarathons, including several 50 milers and double marathons. His fastest marathon, 3:07:42, was run in 1990. A two-time finisher of the Boston Marathon, Raia for the past several years has completed many of his marathons in the 3:45 range.

How To Run And Enjoy The Marathon is chock-full of practical advice about the wondrous journey on foot. Its chapters include:

* Marathon No. 1: It’s not all about pain
* What Marathon? Plentiful choices abound
* The Basics: Common sense for the masses
* Marathoning For Dollars: Running is fitness on the cheap
* Want To Finish: Join the club
* Fleet Feet: If the shoe fits, wear it
* Need Motivation? Take a break
* Now Hear This: Just Say No To Headphones
* Night Moves: Exercisers Need A Visible Presence
* Women Marathoners: Running Safe Means Running Smart
* Running vs. Walking: Marathoners Can Do Both
* Runner’s Creed: Share Thy Space
* Marathon Time Limits: The race directors’ dilemma
* Marathon No. 1 (Revisited): Don’t Forget The Little Things
* Reference Guide: Where to Find Out More About The Marathon 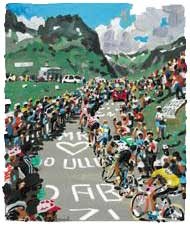 The Tour Within the Tour de France
by James Raia
Price: $8.95

The Tour de France is the world’s greatest cycling event. As the bicyclists climb into the mountains and quickly pass through the rolling countryside, many other postcards of life occur away from the competition – the ambience, the restaurants, the uniqueness of the villages and the people who live and work among fields of sunflowers, near ancient castles and among fields of expansive vineyards. The Tour Within The Tour de France includes 24 essays about the author’s first six years of attending the race.