(This article originally appeared in the Miami Herald on July 21, 2002.)

BEZIERS, France – Cycling is not always understood as a team sport. But as Lance Armstrong continues his quest for a fourth straight Tour de France title, the two leading teams in the race have provided ideal examples of how the sport works.

In the 10th stage last Thursday, Armstrong regained the lead he held previously only after the prologue July 6. 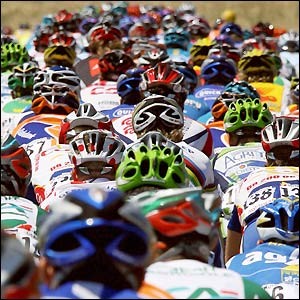 But while he won the 11th stage and subsequently the 12th stage Friday, it was the remainder of his eight-rider U.S. Postal Service team that surrounded him. Whether it was on the flats or in the mountains, team’s collective job was to protect, support and provide drafting its team leader.

Most importantly is the team’s help as riders approached the various climbs toward the finish at La Mongie, high into the Pyrenees.

Simultaneously, the supporting members of the Spanish ONCE team surrounded the former race leader, Igor Gonzalez de Galdeano — for as long as they could.

During a brief moment in stage 11 on the live European telecast of the event, the teams working for their respective leaders were shown in an superb aerial view.

The seven support ONE riders (one member the team dropped earlier in the race), rode nearly side-by-side with the eight team riders, known as domestiques (French for domestics), who surrounded Armstrong.

But when the riders reached the mountains, the teams’ non-climbers began to peel away.

In the instance of the U.S.P.S. team, it was Spanish rider Roberto Heras who remained and who guided Armstrong to the win, a victory Armstrong would have preferred to give to his teammate.

When Galdeano dropped off the pace as the riders progressed on the steepest part of the climb, Heras accelerated and Armstrong followed right behind.

“Heras started a rhythm that was very fast,” said Armstrong. “I was in no position to attack. I just followed Roberto to the finish. Heras sacrificed everything for the team and I am grateful.”

Beloki was often sandwiched between the two riders, and never took his turn at the front of the trio as the riders edged closer to the finish.

Armstrong didn’t need the stage win, since he had overtaken Galdeano’s race lead on the course. But there was a caveat. The winner of the stage earned 20 bonus seconds of time, while the runner-up earned 12 seconds and the third-place finisher received eight.

“We talked about giving the stage win to Roberto, but with the bonuses involved, you can’t take chances like that when you’re riding for the yellow jersey,” said Armstrong. “He was the strongest rider of the day, but you can lose the Tour de France sometime with proper etiquette.”

Despite Armstrong winning what would be the first of his two consecutive mountain stages, he did not celebrate overtly at the finish.

Instead, Armstrong just clenched his fist at his side, an acknowledgment of the win, but more a small gesture to show respect him teammate.

“I didn’t have the legs, really,” said Armstrong. “Heras was the strongest climber. I just followed his wheel.”

Such is the team strategy of stage racing.

In addition to Armstrong, the U.S.P.S. team includes Viatcheslav Ekimov, the Russian who is the reigning Olympic time trial gold medalist; George Hincapie, the Greenville,. S.C., resident who’s a one-day classic specialist, and specialist climbers like Heras and Hugo Victor Pena of Colombia and Floyd Landis, the 26-year-old Californian who’s riding in his first Tour.

While the riders have their own accomplishments, in the Tour de France, individuals’ goals are sacrificed to help the rider who’s highest in the team in the overall standing, or general classification.

Like other teams, the U.S.P.S. squad meets each morning to discuss the day’s strategy. Depending upon who’s feeling well or who’s suffering from sickness or recovering from a strong ride the previous day, the team will rotate its responsibilities.

Landis, for example, might be responsible for leading the group early in the mountains, then followed by Ekimov or Hincapie. The roles can also be reversed. Jose Luis Rubiera of Spain, Pena and Heras are usually saved for the most severe climbs – to assist Armstrong for as long as they can.

Most often in flat stages, team riders are assigned to finish just ahead or behind Armstrong, or to ride to his left or right as a wind breaker.

Whether Armstrong is victorious or the individual overall winner is someone else, the winner’s prize money $335,390, plus various individual stage win moneys and team stage earnings.

If Armstrong wins, he will continue his tradition of dividing his earnings among his teammates, but will not take his share.

Armstrong, of course, will make his money away from the competition, with his team contract, sponsorships and his various other business pursuits as a multiple winner of the Tour de France.