Tour de France champions all have different styles. But through the race’s more than 100-year history, the best have also all been the same in some respects. They’ve  all had great individual skills and a focused desire to win.

Naming five of the best Tour de France riders is easy. Each dominated the event during their tenures.

Plenty of other great bicyclists have competed in the Tour, but here’s my list of the 10 finest in history 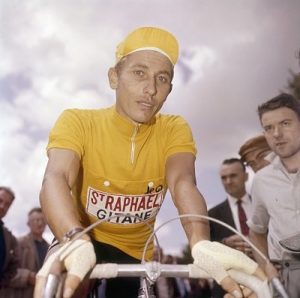 Contrary to the regimented training of many champions, Jacques Anquetil became the Tour’s first five-time winner with a unique, playboy lifestyle, a profound swagger and tremendous skill as a time trialist.

Raised in the country, Anquetil’s career curiously involved number 17. He won the Grand Prix des Nations, and then the unofficial time trial world championship, at age 17, and he raced for 17 years.

Anquetil claimed his first Tour title in 1957 with nearly a 15-minute victory over Marc Janssens of Belgium. Anquetil celebrated his notoriety with as much vigor as he rode. He led a party lifestyle and fit the part of a Southern California surfer: Anquetil had blond hair and blue eyes and often drove a sports car to races. Anquetil was infamous for smoking and drinking, and he uttered among the most often cited quotes in Tour history: “You can’t ride the Tour de France on mineral water.”

Four years elapsed before Anquetil claimed his second Tour in 1961, and he then won three more consecutive titles. Following his cycling retirement, Anquetil was in poor health for many years and died of stomach cancer in 1987.

Brash and explosively talented, Lance Armstrong was age 21 in 1993 when became the youngest cyclist to win the World Championship road race. But youthful confidence doesn’t always mean much in the Tour de France.

Armstrong completed the event only once in his first four attempts, a 36th place overall finish in 1995. It was the same year his Italian friend and teammate Fabio Casartelli died during the race following a tragic hillside crash.

Armstrong’s two-year absence from the Tour following his 1996 race abandonment was largely spent in recovery from his well-documented battle against testicular cancer. Armstrong returned to the Tour in 1999 more than 20 pounds lighter. Much to the surprise of the French media, Armstrong won the prologue. He also captured three more stages en route to the first of his six Tour titles, with more than a 7 1/2-minute margin over Alex Zulle of Switzerland.

Armstrong, who retired after his 2005 win, was a dominating individual rider, a masterful tactician, and a consummate team rider. Many of Armstrong’s stage wins occurred in epic battles against the sport’s finest, including German Jan Ullrich, the 1997 race winner, and deceased 1998 race titlist Marco Pantani of Italy. Armstrong has withstood numerous crashes. He has also spoken out in response to numerous drug accusations.

Many Tour de France riders’ careers are fleeting. An ill-timed, split-second decision has stopped more than one cyclist’s career. But not even WWII stopped Gino Bartali of Italy.

After winning his first title in 1938 — the first year individual riders weren’t allowed to race but were required to compete for teams — Bartali returned a decade later and won again. While his doomsayers thought the 34-year-old was too old, Bartali’s fans remembered his dominating pre-war mountain performances.

Bartali logged huge chunks of training miles and was devoutly religious. He didn’t get along well with his equally famous countryman, Fausto Coppi. In fact, the two argued as the 1948 race approached and, in disgust, Coppi refused to participate.

Bartali remained unfazed. He attacked early and won the first stage in 1948, but faltered the next day. At the end of the first week, Bartali trailed Frenchman Louison Bobet by more than 20 minutes in the general classification. When the race entered the Pyrenees, Bartali responded, knowing the seventh stage ended in the faithful city of Lourdes. He claimed the stage, won two more stages in succession, then crushed the field in the Alps.

Bartali eventually won seven Tour stages in 1948. With descending skills as strong as his climbing abilities, he claimed more than a 16-minute win over Belgium’s Brik Schotte. Bartali’s second Tour win placed him in a one-member fraternity. He’s the only Tour rider to win overall titles a decade apart. Bartali also finished the Tour in second (1949), fourth (1951 and 1952), and 11th (1953), and he completed his Tour career with 12 stage wins.

Gino Bartali entered the 1949 Tour as defending champion. He and Fausto Coppi reconciled, and the two Italians were ready for a much-anticipated battle. Coppi had already won the Tour of Italy three times, but at age 29 — six years younger than his compatriot — he was ready to claim his first Tour.

The two Italians often rode near each other in the second week in the Pyrenees. When the race entered the Alps, Coppi showed his still-youthful strength. He left Bartali as the race arrived in Italy and claimed a mountain stage and time trial en rout to an 11-minute overall win over his aging countryman.

Swiss riders Ferdi Kubler and Hugo Koblet, respectively, won the 1950 and 1951 Tours. Coppi returned in 1952 after overcoming two sub-par racing years and the 1951 death of his brother during a road race. Coppi, 33, was in superior shape, and he won his second Tour by nearly 30 minutes over Belgian Constant Ockers. Coppi won five Tour stages in 1952, including the inaugural ascent of L’Alpe d’Huez, the event’s most famous climb.

Coppi participated in the Tour only three times. His career was interrupted by war, numerous injuries, family tragedy, and his feisty temper. He won nine Tour stages, but when he left the sport, his life crumbled. Coppi divorced his wife for a girlfriend, a scandal that shocked Italy at that time. Coppi’s untimely death at age 40 from Malaria only further added to his legend. Like Fausto Coppi, Jacques Anquetil, and Eddy Merckx, Bernard Hinault — the last French rider to win the Tour — made a stunning debut in the controversial 1978 race. Riders felt the route was too difficult, and they dismounted their bikes at the end of one morning stage to protest.

Michel Pollentier of Belgium won the stage to L’Alpe d’Huez and claimed the yellow jersey. But Pollentier was quickly disqualified from the race. During the post-stage drug test, he was caught using a contraption that held fake urine.

That’s when Hinault capitalized on Pollentier’s departure. He won three stages in his race debut, including two time trials. He claimed his first title by nearly four minutes over Dutchman Joop Zoetemelk. With a defending French titlist, the host country was overjoyed. Hinault won in dominating fashion in 1979, claiming seven stages and further displayed his determined, sometimes harsh nature. His demeanor and gritty facial expressions earned him the nickname “The Badger.”

Hinault’s only weakness was tendonitis. Suffering from severe knee pain, he abandoned the 1980 race as it entered the Pyrenees. Hinault won again in 1981 and 1982, but he missed the 1983 race when his tendonitis returned. Hinault was determined, and after finishing second to compatriot Laurent Fignon in 1984, he claimed his fifth title in 1985. American Greg LeMond was Hinault’s teammate and appeared in position to outshine the French star. Hinault was weakened by crashes, but Hinault hired LeMond as a support rider, not a race winner. LeMond was upset, but he relented. Hinault, who wore the yellow jersey for 78 days in his career, concluded his Tour efforts in 1986 when he finished second to LeMond.

Hinault had 28 stage wins in eight Tour appearances, and he is now part of the Tour organization and greets podium finishers after every stage.