The French sporting public likes compatriot champions. They also cheer for any countrymen in the Tour de France — even if he has no chance of winning but displays perseverance.

A French rider hasn’t claimed the Tour since Bernard Hinault in 1985, so sometimes fans resort to etching favorite former riders’ names in chalk on race roads.

On other occasions, fans wave huge handmade signs on mountaintops for retired French riders as if their ghosts are still in the race. 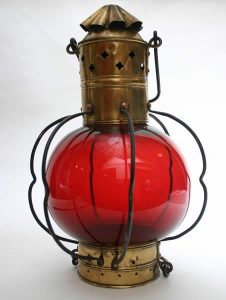 With nearly equal fervor, enthusiasts who camp for days in the Alps and Pyrenees to watch Tour de France riders pass in a flash, appreciate the underdog.

Nothing demonstrates this more than the tradition of the lanterne rouge or red lantern. It’s the honor given to the rider who finishes in last place in the overall Tour de France standings.

Named after the red lantern on the caboose of a train, the lanterne rouge honor began in the first Tour de France in 1903.

It’s never been an official designation, but the last-place cyclist receives his share of admiration.

In recent years, Tour organizers have discouraged any publicity about the red lantern because riders fervently began to abuse its original intention.

Since the second-to-last rider in the final standings’ wouldn’t earn anything for his status, back-of-the-back riders took crafty measures to finish last. They’d hide behind buildings, coast along routes or feign injury in order to be last.

The last rider doesn’t receive prize money for his finish, either. But in yesteryear, it was common for lanterne rouge honorees to receive sizable appearance fees to compete in post-Tour appearance criteriums, the fast-paced races on short, enclosed courses throughout Europe.

“It adds nothing,” Jean Marie Leblanc, the now-retired Tour de France race director said of the red lantern designation. “Today it is part of the lore of the Tour de France, but it no longer exists officially or unofficially.”

Yet the red lantern is still a revered Tour accomplishment.

As the race advances into the Alps and Pyrenees and the across wind-whipped countryside, riders at the bottom of the overall standings face a difficult challenge.

Should they give up and hope for a better race next time or push themselves to an extreme to remain within the varying time limits of each subsequent stage with a goal of finishing last? 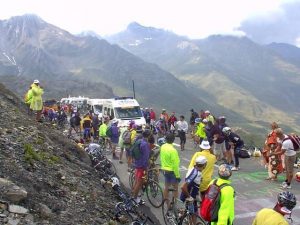 In some instances, riders can still receive appearance money to ride in post-Tour criteriums.

“I had a Belgium teammate and he was the last (rider in the Tour), but he didn’t get anything,” said Belgian rider Mario Aerts said during the 2005 Tour de France. “But maybe he would have if he were a French guy.”

French rider Jimmy Casper, a veteran Tour de France rider who also won more than two-dozen races in his career, captured the lanterne rouge honor twice. On the final day of the race in Paris, Casper has capitalized on his status and carried a small red lantern for the purpose of seeking publicity and post-Tour business opportunities.

A rider is also the current red latern in this year’s Tour de France. Still riding in the first week of the race, Geoffrey Lequatre of Cofidis was more than 44 minutes behind race leader Fabian Cancellara.

And the field had yet to even encounter and of the race’s seriously difficult mountain passes in the Alps or Pyrenees.

Some Tour de France riders would rather not hear or discuss the red lantern.

“I don’t care to think about that,” said Italian rider Gianluca Bortolami. “There are always plenty of guys behind me.”

Michael Boogerd, the Dutch rider and several-time Tour stage winner, commented he has little time for such trivial concern. He’d rather concern himself trying to compete against riders vying for the overall title.

Conversely, Spanish rider Iker Flores had plenty of concern. He was the Tour’s lanterne rouge for several days during the 2005 race.

With the continuing difficult climbs of the Pyrenees looming, Flores was nearly 6 1/2 minutes behind the next-to-last rider. And while he retained his lanterne rouge status, Flores achieved increased fan support.

Throngs of Basque fans raucously the rider and his countrymen as they faced the challenges of the Pyrenees. The Basque are almost as passionate about the Tour de France as the French, whether their riders are in first or last place.