I first reported on women’s cycling about 20 years ago.  It was the best of times for the sport on the road, on the track and in the dirt. 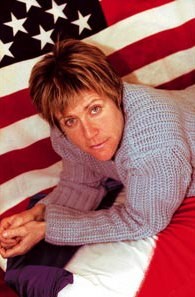 Jeannie Longo of France, one of the greatest athletes in history, was in her prime and American riders like Inga Thompson, Connie Paraskevin-Young, Karen Bliss, Ruthie Matthes, Rebecca Twigg and Julia Furtado rode impressively and unheralded in their respective specialties.

It was during same time frame, I first met Marion Clignet. She was outspoken, funny and there was a sparkle in her eyes — like she knew something the rest of us didn’t.

Marion was overweight and she had epilepsy. She was shunned by the U.S. Cycling Federation and she spoke her mind about her disagreements with the country’s cycling governing body. She worked hard to succeed in cycling, and I liked her immediately.

I don’t Marion Clignet well. She retired in 2004 and lives in France where her parents were born and raised. But we’ve e-mailed from time to time through the years and she recently sent me a copy of her autobiography, Tenacious.

The book is a wondrous tale of Clignet’s journey in cycling and in life. And it’s about a great athlete you may have never of and how she rode her bike to six world titles, two Olympic medals, and numerous French and U.S. National titles.

Written with Benjamin Hovey, a former American’s Cup yachtsman who’s also an epileptic, the 216-page book, published last October, includes 12 easy-to-read chapters. The volume recounts Marion’s early years on the bike as a college student at the University of Maryland to her eventual disappointment in not qualifying for her fourth Summer Olympics in 2004.

Along the way, Clignet provides the reader with an interesting tale of life in the peloton of women’s cycling and in the even smaller niche of women’s track cycling. It details her battle with weight, epilepsy and her fierce track competitions against Longo, the winning cyclist — male or female — in history. The book also provides an insight into a woman torn between two countries, and it honestly portrays her insecurities and her opinions about those in cycling she believes did her wrong.

In chapter 4, entitled “A Thirty-Pound Piece of Junk” Clignet writes: “I had become more dependent on my bike. It was my only mode of transportation, and it was a source of revenue for me as a courier during the summer months.  But I also discovered that the bike was becoming even more meaningful in less tangible ways as each day came and went.

“Riding allowed me to regain the independence I had lost with the revocation of my driver’s license, and it gave me a new sense of freedom and self-confidence. I knew I could rely on my legs and myself.”

In chapter 7, “Picking Up The Pieces,” Clignet offers: “At age 26, I was still wrestling with some of the identity problems of my youth. In terms of my heritage, I didn’t know if I was supposed to be predominantly French or American. I was caught between two cultures, unsure I where I fit it. I continued to feel like an outsider who was different from others.”

Marion forwarded a copy of the book signed: “James! This should bring back a few memories. Hope to see you in France.”

Yes, the book certainly has brought back memories. It’s also a fine memoir written by a tenacious woman and a role model for anyone with a goal — on or off the bike.

Follow the link to the area entitled actualities. All proceeds will go toward epilepsy research.